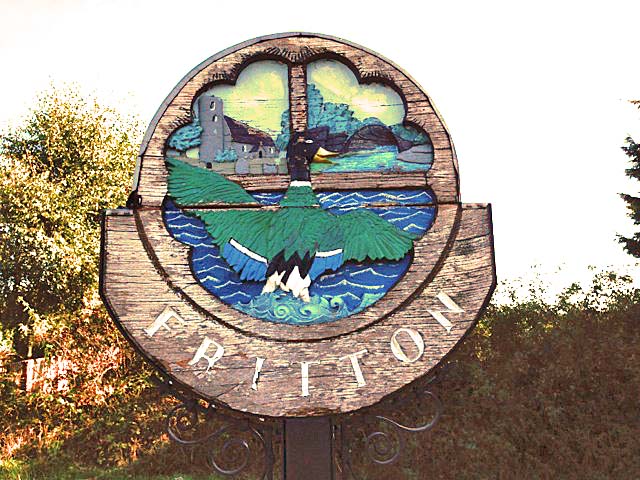 The joined parish of Fritton and St Olaves, formerly in Suffolk, is situated in the very south of Norfolk, and is defined by the River Yare to its west and the River Waveney to its south.

The name Fritton comes from the Old English for ‘fenced in village’, St Olaves being named after the medieval priory. The medieval period following the Norman Conquest has left the parish with its oldest surviving buildings, and probably the earliest of these is the church of St Edmund’s. St Olaves Priory in the west of the parish is probably the next oldest structure, although now in ruins.

Fritton Lake has had many uses over the years, including that of a World War Two training site but in fact was originally medieval peat workings which later flooded. There are three windmill sites in the marshy western region of the parish, all for the purposes of drainage. St Olaves Marsh Drainage Mill is a rare smock mill built in 1910. It was restored in 1980.

St Olaves Bridge is a Victorian road bridge over the River Waveney. Built in 1847, it replaced an earlier bridge of 1509 and an even earlier ferry site. An early cable stayed bridge, it is an important example of cast iron construction.

The location of the parish around rivers (which form natural defence lines) meant that in World War Two, it was an area included in the anti invasion defence network spread over the whole of East Anglia.

Most of the defences were dismantled after the war, but an anti tank mortar base is still to be seen east of the river.* Waveney Forest, also known as Fritton Wood or Fritton Warren, has a long history of military use.

During WW1, it was situated within the infantry defence scheme for Gt Yarmouth and some of the trenches still in place are believed to date from this time. The remains of concrete accommodation and workshop hut bases, ablution blocks can still be seen in many places.

The Parish Council of Fritton with St Olaves is made up of 10 members who represent the villages and the local residents in matters including planning, provision of recreational facilities, crime prevention, footpaths, certain aspects of road maintenance, litter and open spaces.

We are effectively the third tier of local government, the other two being Norfolk County Council and Great Yarmouth Borough Council.

About this site
Welcome. This site has been created by Fritton with St Olaves Parish Council to allow us to better connect with the people living and working in our villages. You can read more about what the council does here.

This website uses cookies to improve your experience while you navigate through the website. Out of these, the cookies that are categorized as necessary are stored on your browser as they are essential for the working of basic functionalities of the website. We also use third-party cookies that help us analyze and understand how you use this website. These cookies will be stored in your browser only with your consent. You also have the option to opt-out of these cookies. But opting out of some of these cookies may affect your browsing experience.
Necessary Always Enabled
Necessary cookies are absolutely essential for the website to function properly. This category only includes cookies that ensures basic functionalities and security features of the website. These cookies do not store any personal information.
Non-necessary
Any cookies that may not be particularly necessary for the website to function and is used specifically to collect user personal data via analytics, ads, other embedded contents are termed as non-necessary cookies. It is mandatory to procure user consent prior to running these cookies on your website.
SAVE & ACCEPT