Fritton Post Office is a village Post Office serving the local community of our villages and the surrounding area. Postmistress Sue has been offering a friendly and reliable service for more than 40 years and you can beat the queues.

The General Post Office (GPO) was officially established in England in 1660 by Charles II. The General Post Office created a network of post offices where senders could submit items but the ordinary man or woman wouldn’t have had much to do with it as it was expensive and in private hands. All post was transferred from the post office of origination to distribution points called sorting stations, and from there the post was then sent on for delivery to the receiver of the post. Initially it was the recipient of the post who paid the fee, and he had the right to refuse to accept the item if he did not wish to pay. The charge was based on the distance the item had been carried so the GPO had to keep a separate account for each item. In 1840 the Uniform Penny Post was introduced, which incorporated the two key innovations of a uniform postal rate, which cut administrative costs and letters could be delivered anywhere in Britain, whether near or far, for a penny to a named receiver (now the post master/mistress) for distribution. Postal business boomed. 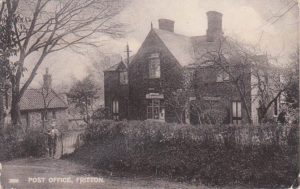 About this site
Welcome. This site has been created by Fritton with St Olaves Parish Council to allow us to better connect with the people living and working in our villages. You can read more about what the council does here.

This website uses cookies to improve your experience while you navigate through the website. Out of these, the cookies that are categorized as necessary are stored on your browser as they are essential for the working of basic functionalities of the website. We also use third-party cookies that help us analyze and understand how you use this website. These cookies will be stored in your browser only with your consent. You also have the option to opt-out of these cookies. But opting out of some of these cookies may affect your browsing experience.
Necessary Always Enabled
Necessary cookies are absolutely essential for the website to function properly. This category only includes cookies that ensures basic functionalities and security features of the website. These cookies do not store any personal information.
Non-necessary
Any cookies that may not be particularly necessary for the website to function and is used specifically to collect user personal data via analytics, ads, other embedded contents are termed as non-necessary cookies. It is mandatory to procure user consent prior to running these cookies on your website.
SAVE & ACCEPT